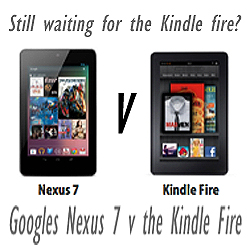 This site offers a new Kindle ebook every day for FREE

All the books in the right hand column can be downloaded to your Kindle or Kindle app software.

You can subscribe to the emails on the right of the web site and get updated daily either by email or to your RSS reader. You can also follow Kindle Free Books on Twitter


If you live in the UK and are still waiting for the release of the Kindle fire the wait will not be over any time soon.

For whatever reason the kindle fire a full colour e reader that is tied into the kindle range is only available to the UK via grey imports.

And that ties UK users to the American only version.

But now there seems to be an alternative that may change the way consumers read kindle titles. 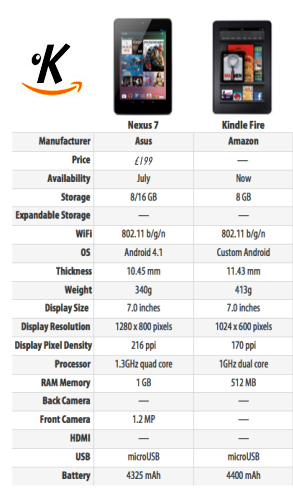 Google's nexus 7 Tablet is available in the U.K. for £199 and may will prove a better alternative for kindle users who want more from their e reader.

The kindle fire uses a version of Google's operating system so Amazon are already compatible with the new product.

The Nexus 7 has a 7 inch touch screen and uses androids latest jelly bean software. Other features of the Nexus 7 include 1GB of RAM, a 1.3 mega-pixel camera and support for WiFi, Bluetooth and a 3G model.

Kindle reader is Amazons own free software allowing you to use your existing kindle library account and download books as usual.

But there are many other advantages to owning one of these new tablets listed on the comparison chart above.


1. They are both the same size but the Nexus 7 is sleeker weighing in at a comfortable 340g which is 25% lighter than the Kindle Fire. This makes a difference if you read holding your tablet in front of you.

2. The nexus 7 has a 8gb and 16gb model the fire has only 8gb of storage memory. Both models are of fixed memory and are not upgradable.


3. The nexus 7 offers a 1280 x 800 display whilst the Kindle Fire offers 1024 x 600. Both display sizes offer good resolution for reading but images are greatley improved with higher resolutions.


4. The nexus 7 has a camera, the kindle does not. This seems like an advantage to me especially when and if the Kindle fire gets released in the U.K. the price point will be the same.


5. The RAM is doubled up on the Nexus 7. The kindle Fire carrying 512MB the nexus has 1GB of internal memory.


6.The nexus has an improved battery (up to 8 hours according to some tests) and a more powerful proccesor.

7. The Nexus 7 has the most recent Android operating system allowing you to use the full range of apps and accessories available on the Google app store.

Now if you add this to the fact that the Kindle fire is not available in the U.K. at the current time you ca see the advantages of this new machine.

This may well see off the Kindle Fire in the UK altogether.

View Google's Nexus 7 and it's competition on Amazon here and find out more.


The prices are variable right now but within a monthe a stable sub £200 price will be the norm.